The International Salvage Union (ISU) statistics for 2015 indicate a robust industry continuing to provide vital services in the face of a challenging economic climate for world shipping. Safer ships and better operating practice have generally reduced the amount of emergency response work for salvors but individual cases may be more complex and wreck removal activity continues to be an important source of income.

Gross revenues for ISU members in 2015 from all activities fell slightly to US$ 717 million. It compares with US$ 775 million in 2014. The statistics are for income received in the given year but which may relate to, in some cases, operations from a preceding year.

Revenue from Lloyd’s Open Form (LOF) cases at US$ 83 million is the lowest in more than a decade. 2014 saw the lowest annual number of LOF cases on record (37) and this may be reflected in the 2015 ISU statistics. At the same time, revenue from operations conducted under contracts other than LOF was the second highest at US$ 98 million and shows a gently rising trend.

Revenue derived from the Special Compensation P&I Club Clause (SCOPIC) in LOF cases increased significantly to US$ 139 million in 2015. It may be that this is due to a combination of reasons including a higher than average number of low-salved- value casualties which led to an increase in the invocation of SCOPIC, and a higher than average number of SCOPIC claim settlements in 2015.

Total salved values (ship and cargo) in LOF cases has fallen to US$ 638 million in 2015 from US$ 1.2 billion in 2014. But the average value salved in LOF cases has remained reasonably consistent at US$ 19 million. The figure has stayed within the US$ 15 – 25 million band since 2010. Average LOF revenue expressed as a percentage of average LOF salved value has fallen for the second consecutive year and was 13%.

Commenting on the statistics, ISU President, John Witte said: “Our members are proud to serve the shipping community and they make a major contribution each year to mitigating potential loss. In 2015 our members’ gross revenue – not profit – stayed broadly the same as the previous year.

“But the statistics again show the variability of our industry and the fluctuations in the sources of revenue.

“There has been a decline in the contribution of income from traditional LOF cases. That is offset to some extent by increased SCOPIC revenue and steady wreck removal income which, over the years, has become increasingly important for our members, and, indeed, our clients.

“We know the days of more than one hundred LOFs each year are gone but nevertheless ISU believes it remains the best contract in many emergency response situations.

“Using the right contract in the right situation is very important and owners, insurers and salvors are committed to improving their understanding of each others’ needs and preferences which will improve trust on both sides.”

Please click on the images below to view a larger image. 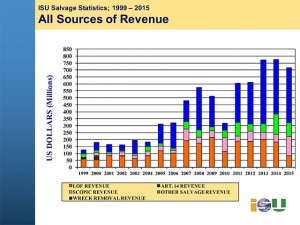 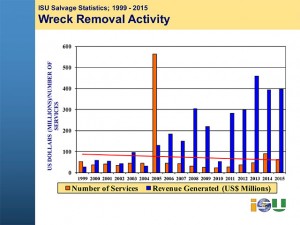 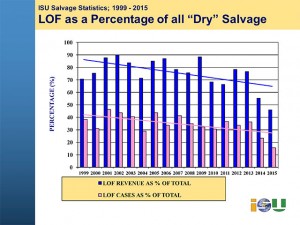 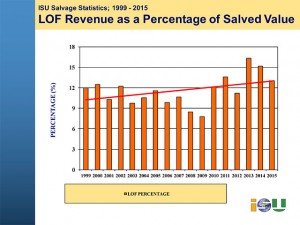 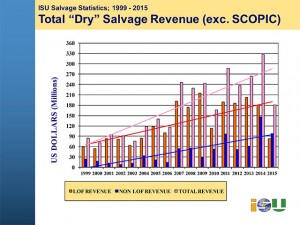 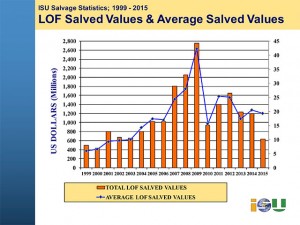 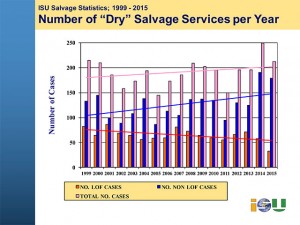